skip to main | skip to sidebar

A petition has been submitted to the White House requesting that copyright duration be rolled back to a maximum of 56 years. I have long called for a shorter term of copyright, but I won't be signing this petition. That is because too much has happened since 1976 for it to be reasonable to ask for a single 28+28 year copyright term as we had for all published works under the 1909 act.

An important feature of the 1976 Act was the suppression of the common-law right of first publication in unpublished works. Careless writers called this old common-law right a "common-law copyright," and some insisted that it was perpetual, but this was an exaggeration. It was more accurate to state that it was a right of first publication, not a copyright, and that it was of indefinite duration. It could, indeed, last generations if carefully preserved. The 1976 Act abolished this right and replaced it with a statutory copyright in unpublished works, based on the life of the author. This is one feature of the 1976 Act that I consider worth preserving rather than rolling back. The petition submitted to the White House makes no mention of the distinction between published and unpublished works, and the difficulties of defining a term for unregistered unpublished works.

Also, it makes more sense now to have different copyright terms for different classes of works. Computer software source code, in particular, should have a much shorter term than books or songs.

Finally, as Mike Masnick points out, it is Congress that makes the law. A petition to the President should recognize this.

The undersigned respectfully request that the President consider the following proposals for the amendment of the U.S. copyright law, and if he deem any of them "necessary and expedient", that he recommend them to the Congress in accordance with Article II, section 3 of the constitution; or, if he find any of them not to be necessary or expedient, that he reply to this petition in writing giving his reasons.

2. We request that the duration of copyright in computer software source-code to be reduced to a term of 25 years from creation. The Patent and Trademark office, or the Copyright Office, would be empowered to issue rules for computing a presumed date of creation when it cannot be determined from the text of the source code itself.

3. We request that the law be amended explicitly to state that the author's exclusive rights, once they have expired by operation of the law, become rights that are vested in the general public. An explicit statement is necessary due to the contemptuous and scornful tone toward the concept of publici juris works that was used by the U.S. supreme court in its Eldred and Golan decisions.

4. We request that the United States withdraw from the Berne Union.

Posted by Mockingbird at 9:11 PM No comments:

Yochai Benkler: Next steps after tactical victory on SOPA/PIPA.

Yochai Benkler has a good discussion of recent developments. He includes four proposals:

Legislatively re-instate the Sony doctrine and reverse Grokster. Technology developers should only be liable for copyright infringements by users if there are no substantial non-infringing uses of the technology.

Decriminalize copyright to pre-1998 levels: put the Golem to sleep. Return the definition of criminal copyright to require large scale copying for commercial gain; reduce the funding to criminal enforcement and reduce the presence of federal functionaries whose role is to hype and then combating the piracy threat. In particular, as calls to shrink the federal government abound, it is critical to include in every legislation downsizing the federal budget provisions that would defund and eliminate most of the burgeoning apparatus of multi-agency criminal enforcement of copyright. The most direct pathway to this will be in appropriation bills, to defund implementation of PRO-IP until a more balanced substantive approach can be worked out.

Create a fair use defense to the anticircumvention and antidevice provisions of the DMCA. Users should be exempt from DMCA liability if they propose, in good faith, to make a fair use of the encrypted materials. Decryption and circumvention providers should be exempt from liability on the model of the Sony doctrine, if there are “substantial non-infringing uses” for the circumvention technology or device they offer. This would fix a much older overreach by the industry, from 1998, that has been very slowly and imperfectly loosened by the Librarian of Congress under powers to exempt certain uses from liability.

Rein in the international trade pathway for copyright extension. Another pathway, similar to criminalization in the sense that it harnesses federal functionaries to help the industry, distinct in the set of functionaries it harnesses, has been international trade. Through a set of trade agreements, both bilateral and multilateral, the U.S. government has pursued the passage of requirements more stringent than it could itself pass in the U.S. The recent adoption of SOPA-like laws in Spain is one example, as is the notorious Anti Counterfeiting Trade Agreement (ACTA). We need a law that would prohibit secret negotiation of IP-related provisions in international agreements, and a law that prohibits the U.S. from entering agreements that require of ourselves or our trading partners more restrictions on the public domain than then-current U.S. law permits.

I would add, as always, reduce the duration of copyright in published works.

Posted by Mockingbird at 12:23 PM No comments:

Here was another version of the Adam and Eve picture that I made for last year's anniversary of the uprising of 1381. 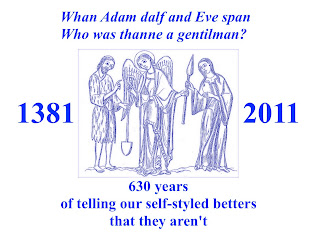 Posted by Mockingbird at 5:42 PM No comments: 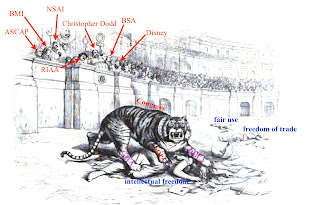 Posted by Mockingbird at 6:53 PM No comments:

Mockingbird
Between Broken Bow and Black Mesa
I am a physicist, musician, software developer. I am also one of the "men of '98" who opposed the Copyright Term Extension Act (CTEA) in 1997-1998.