skip to main | skip to sidebar

In praise of creative freedom 5--Steal this country dance

It is sometimes said that copyright is an incentive to creation, meaning that the possibility of reward to the author creates an incentive to the author to produce and circulate his (for "author" is a grammatically masculine word, just as "artist" is grammatically feminine) work. This may be true, but it is not the whole story. In order to demonstrate why I think this copyright-as-incentive notion is incomplete, I will describe how I recently created an arrangement of an 18th-century English country dance, Nottingham Castle.

I start with the melody. This melody was first published in the 11th edition of The Dancing Master in 1702, and it is now publici juris. Here is the version of the melody from the 12th edition of 1703. Because the melody is publici juris, anyone may copy it, from here or from anywhere else it occurs: 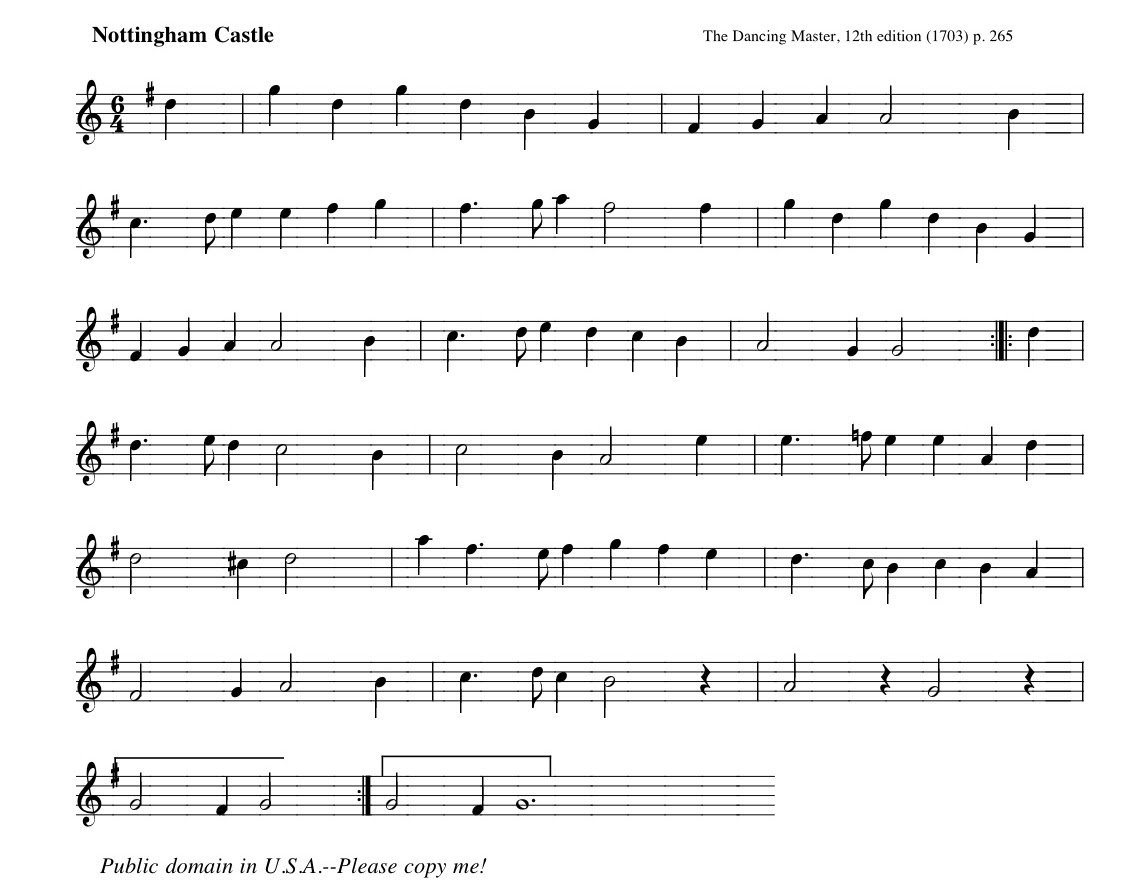 Next I add backing chords. I use basic chords, I, IV, V and their relative minors (since this is a major melody). My chord-underlay is so simple that it might not even be copyrightable. The United States Court of Appeals for the Second Circuit has held (upholding the Federal District Court for the Southern District of New York) that "cocktail pianist variations" on a musical work do not rise to the level of originality to qualify the variations as a derivative work of the underlying work. (Woods v. Bourne,60 F. 3d 978 (2d Cir. 1995)). The Court of Appeals's opinion in Woods v. Bourne, though, refers to minor variations in the harmonization of an already-harmonized work, so it might not apply to harmonization of a melody ab initio. So I regard it as possible, but not certain, that a simple backing-chord underlay for a publici juris melody is sub-copyrighable under U.S. law.

After adding the backing-chords, I devise a counter-melody consistent with them, though in the course of development I might modify the backing-chords to match the countermelody, rather than writing the countermelody strictly to the chords. The counter-melody is probably copyrightable, since (if it follows the rules of counterpoint) it is an independent melody, which if original (which in this case it is, since I wrote it) would be copyrightable on its own. 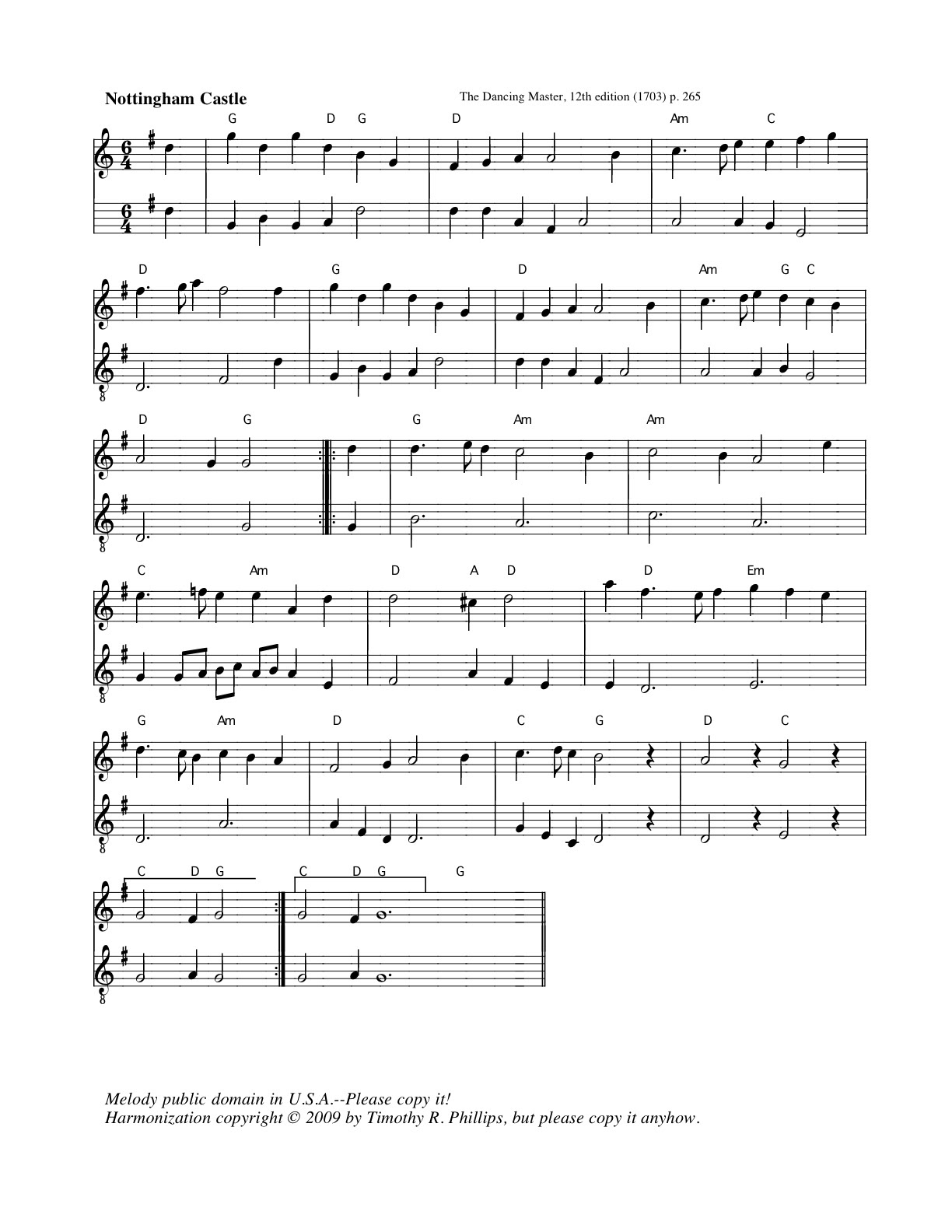 Next, if I wish, I can attempt to market my arrangement. If I do so in a way that relies on the exclusive rights provided by copyright, then copyright can be said to have "promoted the progress of science" by encouraging me to bring my setting of the dance-tune to market. What seems to be far less appreciated, but what is far more important, is that even if I do not choose to exploit my work commercially, the copyright law has still promoted the progress of science in this case. It did this by placing the underlying melody, Nottingham Castle, in the public domain where I could draw on it freely. So copyrights promote progress both by existing, and also (and perhaps even more than by their existence) by expiring. The holes (as Professor Boyle so memorably put it) are as important as the cheese. 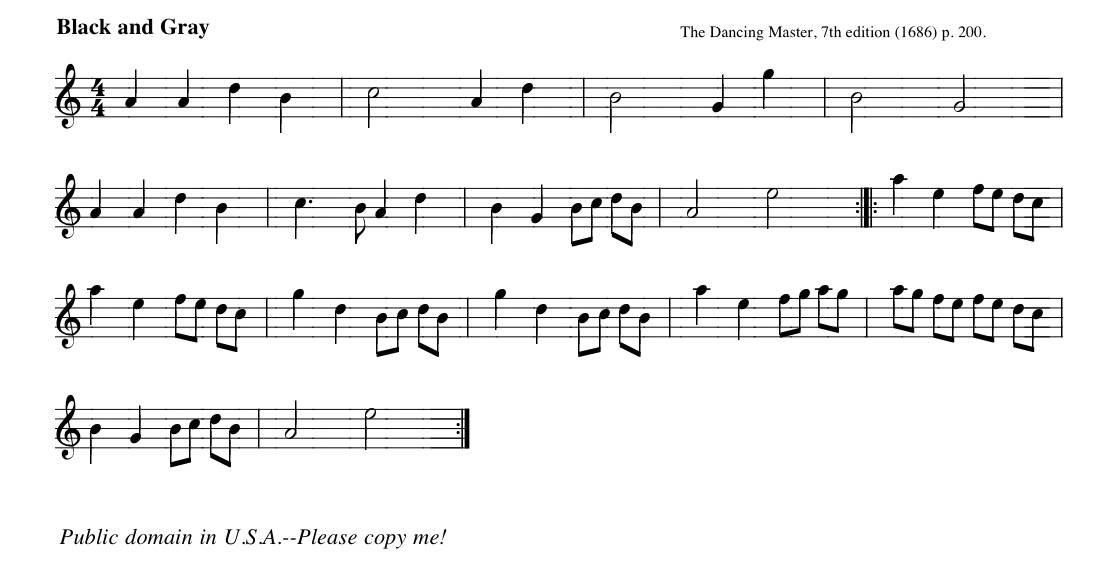 I think I could take this melody and splice into it some musical motifs from John Lennon and Paul McCartney's "Elenor Rigby" to create a new composite dance-tune. But though I may have sufficient musical ability to do this, I haven't the right. This is because the air "Elenor Rigby" is copyrighted, and under my country's copyright laws, the copyright holder's bundle of rights includes the right "to prepare derivative works based upon the copyrighted work." Note that the derivation right is not a right "to prepare derivative works for public performance, dissemination, or display." It is an unqualified right "to prepare" derivative works. Any creation of a derivation of a copyrighted work, however private, is prima facie an infringement of the copyright. Working strictly in private might count as fair use. Maybe. Or maybe construing the right "to prepare" derivative works to reach even to purely private acts would be considered unreasonable statutory construction. Maybe. But even if I don't infringe by preparing the new melody privately, I will certainly infringe if I try to post it to the web or circulate it in sheet music. Here, by contrast to the case of my setting of Nottingham Castle, is a case in which copyright law has prevented the progress of science by including a very broad derivation-right in the bundle of rights granted to the rightsholder.

The U.S. copyright law did not always include a derivation-right. The first U.S. federal copyright statute of 1790 applied only to "maps, charts, and books" as they were published. A competing publisher could not enter the primary market for the book until the copyright expired. But derivations, such as translations, abridgements, and musical arrangements, were free, and the public continued to have this freedom for much of the 19th century.

In theory, (as I noted some years ago here) the public has consented, through its representatives, to derogate to copyright holders the freedom it previously had to make derivations of copyrighted works. In theory we did this because the copyright would become more robust and more potentially valuable with this addition, giving an incentive for the production of still more expression, thereby giving us in the end an even larger public domain than we would otherwise have had. In theory, that is, we voluntarily forego our full rights in more recent works in order to have more works than otherwise to exercise our full rights in after a "limited" time.

In practice, as I noted back in 2005, "the public's representatives have not represented the public so much as private interests". We cannot be said to have gotten a good bargain from U.S. copyright law in its present form. The great breadth of copyright's present scope, whatever might be said on its behalf otherwise, is made intolerable by copyright's extremely long duration. The first step toward making the bargain better for the public would be to reduce the duration of copyright from 70 years after the author's death back down to 50 years after the author's death. This would still be too long, especially for such things as computer software. But we should refuse to allow any further expansions to copyright's scope, however arguably reasonable they might otherwise be, until we first get this concession on its duration.

Posted by Mockingbird at 10:24 AM No comments:

James Boyle on the Black Hole of California

James Boyle has a column (also here) in the Financial Times in which he discusses "the 20th century black hole" of super-long copyright terms, and the possibility that the Google Books settlement might ameliorate some of the Black Hole's effects by allowing orphan works to be available in a snippet-view, so that a researcher can at least get a sense of whether an orphan book would be useful to his research.

Boyle goes on to discuss some of the objections to the settlement. He finds that some of the objections have merit, in particular those brought by other digital libraries (who object that Google will have in effect a monopoly on the digitisation of the orphan works) and by those concerned with privacy (who object that Google will have a record of everyone's access to copyrighted books).

I agree with a lot of the criticisms. Privacy protections could be improved, the monopoly point is a real one and the rights of libraries should be expanded. Some of those points might be fixed before the agreement is ratified. Others may need subsequent scrutiny by privacy and antitrust regulators. Google has responded, persuasively, that many of the problems could be resolved if only we had a rational copyright law in the first place with a safe harbor for the use of orphan works.

Or if we had a shorter term of copyright, there would be fewer orphan works to begin with.
Posted by Mockingbird at 7:39 AM No comments:

Michael Geist on the principles of copyright reform

Michael Geist has an article (also here) in the Windsor Star in which he lays out four principles that should guide copyright reform:

Geist's analysis of how these principles should apply in the drafting of a new copyright statute for Canada are for the most part thoughtful and sensible. But his article doesn't explore the implications of these principles as deeply as it might.

The principle of "balance" for example, if properly applied, would call for a reduction in the term of copyright in books from life+50 years to life+35 years or to an even shorter term. Canada's membership in the Berne Union means that it cannot unilaterally reduce the copyright term for books below life+50 years. But if international copyright agreements allow for shorter terms than Canada currently provides in works other than traditional books, Canada should consider reducing its term of copyright in such works. And nothing prevents the Canadian government from introducing proposals for a duration for traditional writings shorter than life+50 years in meetings of the international copyright councils of which it is a part.

Nor does Geist seem to appreciate that the third and fourth principles are to some extent incompatible with each other, flexibility sometimes coming at the expense of clarity. In the U.S. the law of fair use in copyright is very flexible. But precisely because it is flexible, it is hard to predict in advance whether any use, other than in the simplest cases, will be considered fair. The more the flexibility, the less is the clarity.

Andrew Robinson, leader of the Pirate Party UK, has a description of his party's principles in The Guardian. Also in the last two days, news has come that the German Pirate Party may have had some of its candidates seated on municipal councils. If it is asked, why is a party whose main platform consists of proposals for copyright and patent reform have an interest in municipal councils, I think the answer would be: The Pirate Party's platform also contains proposals for communications and privacy policy, which can have local implications; but also, by fielding candidates in local elections, the party is demonstrating its bona fides by showing itself willing to undertake the responsibilities that come with a seat at the policy-making table. They aren't just rich kids who take it for granted that someone else will take care of hauling the trash.

I think I'll go have some rum.

Posted by Mockingbird at 4:58 PM No comments:

Mockingbird
Between Broken Bow and Black Mesa
I am a physicist, musician, software developer. I am also one of the "men of '98" who opposed the Copyright Term Extension Act (CTEA) in 1997-1998.